If you’re not a fan of traditional, mayo-heavy potato salad, this romesco potato salad is for you! Soft potatoes are tossed in an addicting homemade romesco sauce for an flavorful summer side dish.

Hot take: traditional potato salad doesn’t do it for me. I don’t love mayonnaise, and most potato salads I’ve tried lack flavor I crave.

If you’re in the same boat, you must try this romesco potato salad. Instead of mayo, you’ll coat the potatoes in an awesome homemade romesco sauce!

What is romesco sauce?

Romesco sauce originates from Catalonia, an autonomous region in northeastern Spain. Fishermen traditionally prepare the sauce to serve with fish.

Romesco sauce is full of nutritious ingredients. It’s typically made with roasted tomatoes, olive or sunflower oil, garlic, peppers, and almonds, pine nuts, or hazelnuts. Some recipes include vinegars, onion, and fresh herbs.

Romesco adds a ton of flavor and texture to foods, and it’s not just for fish! It’s quite versatile – use as a pasta sauce, on sandwiches, or on grilled vegetables.

How to make romesco potato salad

Notes about this recipe 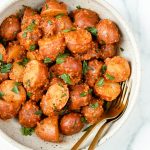 If you’re not a fan of traditional, mayo-heavy potato salad, this romesco potato salad is for you! Soft potatoes are tossed in an addicting homemade romesco sauce for an flavorful summer side dish.

Building healthy habits takes a little work before they stick for a lifetime. Here are 6 strategies that make building…

Wondering if you can drink alcohol and still maintain a healthy lifestyle? Read on to learn more about healthy drinking,…

Jump to Recipe·Print Recipe This peach caprese salad shouts “SUMMER!” from the rooftops. Filled with fresh peaches, heirloom tomatoes, and…