This peach blueberry crisp is vegan, gluten-free, and sweetened only with maple syrup, but it is the most delicious summertime dessert everyone will love!

Cobblers, crisps, and crumbles are some of my absolute favorite desserts, especially in the summertime! The combination of sweet warm fruit, crunchy cinnamon-y topping, and cold vanilla ice cream is just irresistible.

My family makes this cobbler multiple times a summer, and I wanted to create a similar recipe that my people with dietary restrictions could enjoy! This final recipe is a peach blueberry crisp instead of a cobbler, but I promise it is just as satisfying.

What’s the difference between peach blueberry crisp, crumble, and cobbler?

I had to look this one up myself as I was naming this recipe, and thought it interesting to share! These three desserts all have a similar base of warm baked fruit, but the difference is in the topping.

Which one is your favorite? Crisp, crumble, or cobbler?

Ingredients in this Peach Blueberry Crisp

This recipe is so easy to make, and only uses ten plant-based, gluten free ingredients! You probably already have a lot of these ingredients in your pantry. 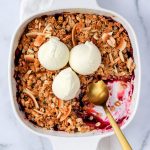 Disclosure: Some of the links in this post are affiliate links, which help keep Daisybeet running. I truly love all the products I link to, and use them frequently in my daily life!

Dietitian Kitchen Essentials: How to Stock Your Freezer

Learn how to stock your kitchen like a registered dietitian to make healthy eating a breeze! This post focuses on…

Jump to Recipe·Print Recipe These healthy lemon blueberry muffins are the perfect Sunday morning treat! They’re made with better-for-you ingredients,…

Jump to Recipe·Print Recipe Introducing my new favorite way to use overripe bananas! I could eat this entire healthy almond…

Jump to Recipe·Print Recipe This garlic and herb mashed cauliflower is a lightened up version of classic mashed potatoes. Everyone…